Concrete is one of the most ubiquitous building materials in the world. It’s strong, durable, cheap, and easy to work with. Despite this, concrete has a significant hidden cost: carbon emissions. In fact, cement—the “glue” that holds concrete together—is responsible for 8% of the world’s carbon emissions!

As discussions rise around embodied carbon’s role in achieving zero carbon buildings and aggressive climate targets, concrete should be in the mix. Here, we dive into the best currently available approaches to reducing concrete’s embodied carbon footprint while also examining low-carbon concrete technologies that are just around the corner.

If you’re interested in pursuing these strategies for your projects, it’s important to connect your structural engineer (who determines performance requirements) with your ready-mix supplier (who determines concrete mix proportions).

As illustrated in the chart below, cement consists of 7 to 15% of concrete’s volume but is responsible for 95% of the emissions. So, reducing the amount of cement used in concrete can have a drastic impact on overall carbon reduction. Supplementary Cementing Materials (SCMs) are products that replace a portion of the cement content. 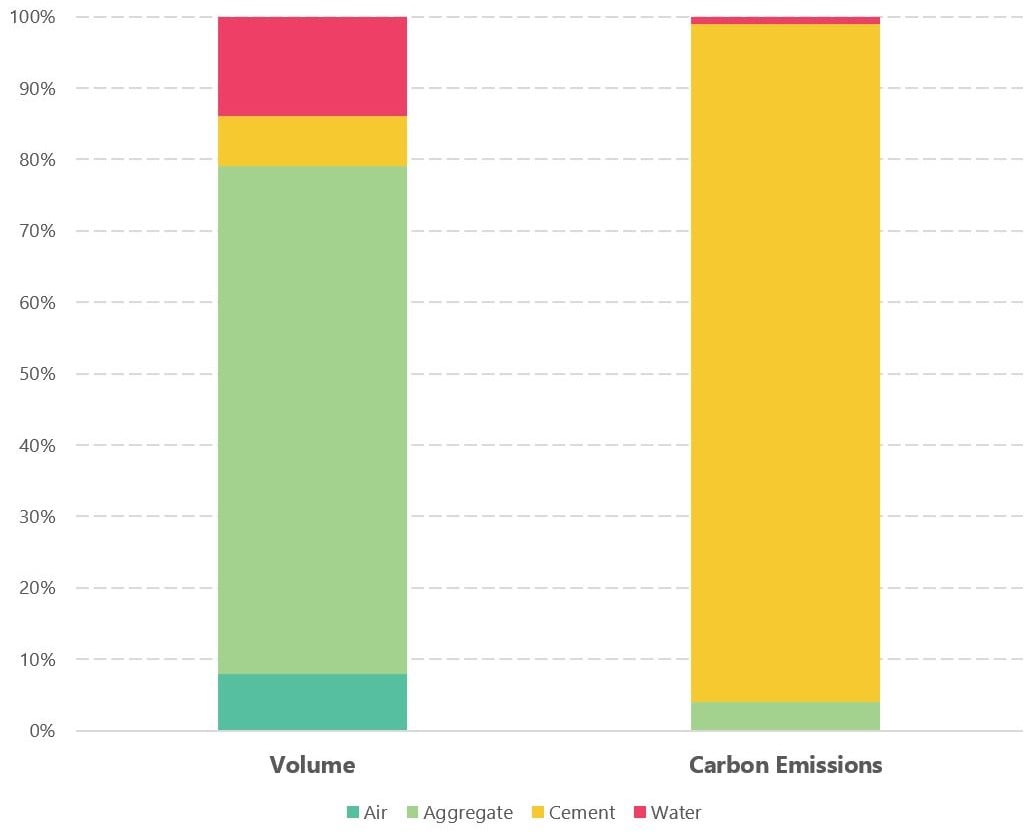 Source: PCA, “How Concrete is Made“

From their leadership in developing high-SCM mixes to publishing more than 6,000 EPDs in the EC3 tool, Central Concrete has been instrumental in progressing the low-carbon concrete movement. We asked Juan Gonzalez, Sustainability Manager at Central Concrete, about the current availability and potential for different levels of SCM content in a mix engineered by Central Concrete.

The percentages below refer to the percentage of cement that is being replaced by the SCM:

In the percentages noted above, the SCMs commonly used are slag (byproduct of steel production) and fly ash (byproduct of coal power generation).

While fly ash and slag are more sustainable alternatives than cement, they’re not perfect solutions. As coal plants in the region (thankfully) shut down, the supply of fly ash goes with it. Similarly, slag is typically obtained from fossil fuel-powered blast furnaces, and as the steel industry shifts to Electric Arc Furnace manufacturing, slag supply will dwindle too.

One alternative we’ve covered in a previous article with Sioneer is recycled glass. Known as glass pozzolan, this material can be substituted for cement and has the additional benefit of creating longer-lasting concrete and a market for post-consumer recycled glass.

In the academic and zero carbon building world, there are numerous other SCMs currently being researched and piloted:

While none of these options have cemented their place in the market yet, they paint an optimistic future of on-demand SCMs in the face of (again, thankfully) dwindling supplies of SCMs from carbon-intensive byproducts.

BEYOND SCMs: OTHER LOW-CARBON APPROACHES

SCMs are a critical component of low-carbon concrete efforts given the high embodied carbon of cement, but we’ve encountered a couple unique approaches to reducing concrete’s carbon footprint:

CarbonCure’s technology injects waste carbon dioxide directly into a wet concrete mix, forming calcium carbonate within the concrete. This technology is currently available commercially and even included by default for most Central Concrete mixes in the Bay Area. We’ve found that this technology typically reduces the carbon footprint of ready mix concrete by 3 to 5%, so while there is a benefit, this should not be the only carbon reduction approach used.

Blue Planet has developed a technology that converts waste carbon dioxide into calcium carbonate rocks to be used as aggregate in concrete. As you can see in the first chart, aggregate comprises approximately 75% of concrete’s volume, so there’s a huge carbon storage potential. There have been successful pilots (including one at SFO), but the technology is still not at commercial scale.

LOW-CARBON CONCRETE: WHAT’S ON THE HORIZON

The approaches above leave plenty for practitioners to get started with, but we can’t help but share a few exciting low-carbon concrete techniques that are in their early stages. While we’re really excited about their potential, they’ll likely need to clear some hurdles before being widely adopted:

Living concrete: Researchers at CU Boulder are working on using cyanobacteria developed to react with sun, carbon dioxide, and waste products to generate concrete. By incorporating bacteria, the concrete could potentially mend its own cracks.

Agricultural byproducts in concrete: Scientists at the University of Tokyo found that mixing discarded, grounded concrete with water and wood waste formed recycled concrete with greater bending strength than the original. Other plant sources, like agricultural waste, may be able to replace wood waste as the main component of the “lignin” binding material.

We still have a way to go as an industry, but we hope practitioners can use this guide as concrete evidence for using low-carbon alternatives. If you’re looking for more information on how to start addressing embodied carbon on your projects, watch Stok’s 5-minute video on embodied carbon.